To share your memory on the wall of Denise Johnson, sign in using one of the following options:

Provide comfort for the family of Denise Johnson with a meaningful gesture of sympathy.

We encourage you to share your most beloved memories of Denise here, so that the family and other loved ones can always see it. You can upload cherished photographs, or share your favorite stories, and can even comment on those shared by others.

Posted Sep 30, 2018 at 12:00am
Denise and I were best friends. We used to do everything together. She helped me paint my home. We would go through my clothes that didn't fit me anymore. She was. So excited, it was like an early holiday. She helped clean 1of my workshop, I would try and peek and she would tell me You can't see it till I'm done. Little did she know I had gotten pictures of her as she was working. She got so upset with me but she liked the pictures I took. And she done a marvelous job. We go to rummage sales she would see something that she really liked a lot, and I would get it for her and give it to her in the car. Shopping was so much fun, both of us wanted every thing we laid our eyes on, and start laughing. I remember going to a baseball game of Donnie's and the other team was up to bat, I started... Continue reading
Comment Share
Share via:
HS

Posted Sep 28, 2018 at 12:00am
On September 24th Denise married Pat Anderson in a small service with only close friends present. She adored him and he adored her. Continue reading
Comment Share
Share via:
AF

Posted Sep 28, 2018 at 12:00am
Denise and I spent most of the 24th together. She was happy despite not feeling well. We were being our usual goofy selves singing the Muppets song manama na... I gave her a foot rub and we watched a movie together. She was the best female friend I've met since moving to Lovilia. Continue reading
Comment Share
Share via: 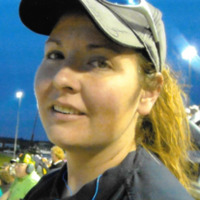