To share your memory on the wall of Vina Lewman Mart , sign in using one of the following options:

Provide comfort for the family of Vina Lewman Mart with a meaningful gesture of sympathy.

Print
Vina Corrine (Lewman) Mart, age 86 of Eddyville passed away on Tuesday morning, January 21, 2020 at the Mahaska Health Partnership. She was born on December 10, 1933 in Montezuma, IA to Alvin and Edna (Lane) Johnston.

She married Will... Read More
Vina Corrine (Lewman) Mart, age 86 of Eddyville passed away on Tuesday morning, January 21, 2020 at the Mahaska Health Partnership. She was born on December 10, 1933 in Montezuma, IA to Alvin and Edna (Lane) Johnston.

She married William “Bill” Lewman on August 23, 1949, and they were blessed with three children: Richard, Gloria, and Willie. She was a stay at home wife and mother when their children were young. She had several jobs around Eddyville area including, the Overall Factory, Superior Ideal, Eddyville Day Care, Mahaska County Hospital, Brooms Incorporated, and cleaning houses. Bill preceded her in death in 1992.

Vina later married Rollin Mart on June 30, 2011. They lived on a farm until his death in 2017. She then moved to Pleasant Valley Manner in Eddyville and enjoyed many friends, family in the Eddyville community. She always had a kind word for everyone she met. She enjoyed singing and dancing, and loved her family with all her heart.

Funeral Services will be held at 1:00 p.m., Saturday, January 25, 2020 at the Eddyville Funeral Chapel with Burdell Hensley officiating. Burial will follow services in Highland Cemetery. Visitation will be held on Friday, January 24, 2020, opening to the public at 1:00 p.m., with Vina’s family being present to greet family and friends from 6-8 p.m. Friday evening. Memorials may be directed to the family and will be directed at a later date. Online condolences may be left for the family at eddyvillefuneralchapel.com.
Read Less

We encourage you to share your most beloved memories of Vina here, so that the family and other loved ones can always see it. You can upload cherished photographs, or share your favorite stories, and can even comment on those shared by others.

Posted Jan 24, 2020 at 09:01pm
Vina was always such a nice and fun loving woman. She worked at the Oskaloosa Library with me for a few years. She will be missed by all.
Comment Share
Share via:
KS

Posted Jan 22, 2020 at 06:49pm
Sorry for your loss she was a great lady and loved by all. I remember being all together and fixing dinner at her house you had to peel the potatoes just right very thin on skins and wash dishes in order glasses then silverware she tell you about it .
Comment Share
Share via:
TR 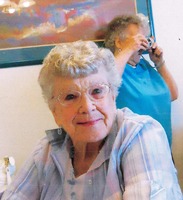