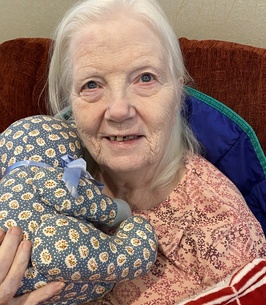 Nadine Colleen Garrett, age 85, of Marion, Iowa, died on Sunday morning, July 31, 2022 at the Marion Winslow House under hospice care. She was born on December 7, 1936 in Oskaloosa, Iowa to Walter and Wanda “Edwards” Watts.

She married Donald Dean Garrett on April 11, 1956, and they were blessed with three children, John, Ben and Karen. She enjoyed word search puzzles, reading, spending time with her family, and she cherished her grandchildren and great grandchildren.

Funeral Services will be held at 10:30 a.m., Friday, August, 5, 2022 at Eddyville Funeral Chapel with Pastor Nick Hughes officiating. Interment will follow in Wymore Cemetery in Rose Hill, IA. Visitation will be held on Thursday, August 4, 2022, opening to the public at 2:00 p.m., with Nadine’s family receiving friends from 5-7 p.m., Thursday evening at the funeral home. Memorials to the family and will be directed at a later date.