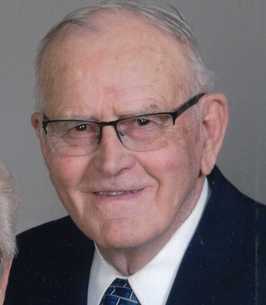 Max Paul Ohms, 86 years, of Eddyville, Iowa, passed away on August 15, 2022 at  home under the care of  Mahaska Health Hospice.   He was born June 17, 1936 in Harlan, Iowa to Hans and Teressa (Sorensen) Ohms.  He graduated from Atlantic High School in 1954 and from Iowa State College in 1958.  While at ISC he was in the ROTC program and he also met Ann Marie Augustine there.  They were married in Eddyville, Iowa on June 22, 1958 at the Eddyville Methodist Church.  Max was commissioned as a Second Lieutenant in the US Air Force on June 14, 1958 when he graduated from ISC.  He received Air Police Officer training at Lackland AFB in San Antonio, TX and was stationed at Clinton Sherman AFB in Burns Flat, OK, a SAC base, from November 1958 to May 1962.  He served as an Air Police Officer supervising the operation of four flights, K-9 section, training section, and armory.  He was promoted to First Lieutenant before he left active duty in May 1962.  While in the reserves, he was promoted to Captain and received an honorable discharge on August 7, 1972.  He worked in feed and seed sales in Missouri and Iowa before he began farming with his brother Dewey in Anita, Iowa.  He farmed in southeast Iowa until 1977 when he became a salesman for Garst Seed.  Max was a 4-H leader in Mahaska County for 7 years.  He was a member of St. John Lutheran Church in Oskaloosa, Iowa since 1970, where he was an active member and served in many different offices and as an elder.  Max was a Ruritan member and a member of the  J.L. and Ed Linderman American Legion Post in Eddyville.  During his life he spent many hours watching children, grandchildren and great-grandchildren play sports and concerts.  Max was an avid Iowa State Cyclone fan and had football season tickets for many years.
Survivors include his wife of 64 years, Ann; Roger Ohms; Beth (Brent) Fenton; Caryn (Lawrence) Smith all of Eddyville;  sister Marie Miller of Coin, IA; and sisters-in-law Lois Ohms of Palo Alto, CA and Joan Ohms of Atlantic, IA.  Seven grandchildren including Katie Smith of Eddyville, IA; Sarah (Tim) Potter of Cedar Rapids, IA; Benjamin (Stacy) Fenton of Bondurant, IA, Paul (Brandon Jacobs) Fenton of Marion, IA; David Fenton of Ankeny, IA; Dritero (Zerina) Sefaja of Prishtina, Kosovo; and Theo Pleie of Dortmund, Germany.  Also 6 great-grandchildren – Madison Smith, Ella and Wesley Potter, Brody Fenton and Rita and Liza Sefaja.  Also many beloved nieces and nephews.  He was preceded in death by his granddaughter Shaun Marie Fenton;  his parents; step mother Winona Stuart Ohms; brothers and sisters-in-law, Dean (Irene), Dewey (Marilyn), Marvin, Jack, Glenn; sisters and brothers-in-law, Greta (Wayne) Ullerich and Nicky (Dick) Stephens, and  Maurice Miller.
Visitation will begin at 2:00 p.m., Wednesday, August 17 at Eddyville Funeral Chapel with the family present from 6 to 8 PM.   Funeral service will be 11 AM, Thursday, August 18 at St John Lutheran Church, Oskaloosa. The service will be live streamed on the St John Facebook page. Burial will be in Forest Cemetery in Oskaloosa with military honors.  Memorials may be given to St. John Lutheran Church, Mahaska Health Hospice, or the Iowa 4-H Foundation.