To share your memory on the wall of Evelyn DenHartog, sign in using one of the following options:

Provide comfort for the family of Evelyn DenHartog with a meaningful gesture of sympathy.

We encourage you to share your most beloved memories of Evelyn here, so that the family and other loved ones can always see it. You can upload cherished photographs, or share your favorite stories, and can even comment on those shared by others.

Posted Apr 18, 2019 at 12:00am
Mom E you were an awesome lady that helped shape my life growing up. You cared for so many of us kids in the Eddyville area and helped us to always do the right thing. I am honored to have had you in my life and thank you for my awesome sis Patty! We tested you growing up but you were always a step ahead of us. I love you and know you are now in heaven with your hands full keeping Porky & Paul in check. Love you Patty & wish I could be there with you. Brenda Continue reading
Comment Share
Share via:
HS

Posted Apr 17, 2019 at 12:00am
This is a great lady and friend to everyone she met. No one was any more ready to step up give the helping hand to anyone would ever needed it. She will be missed greatly to friends, neighbors and the community. Continue reading
Comment Share
Share via:
HS 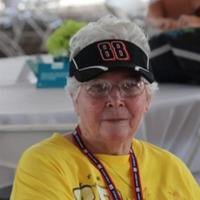